A Brief History of Nantwich written by Tony Park

Nantwich takes its name from the farm of Percy Durban Crewe, one of the first white settlers in Matabeleland, but the history of humankind of this wild corner of Africa goes much further back in time.

In the 11th and 12th centuries the Tonga people of Zambia tried to settle in what is now north-western Zimbabwe, but were repelled by the resident Shona people.

The people who now live around the borders of Hwange National Park are descents of the Leya, who crossed the Zambezi River from Zambia in the 18th century. The Leya later changed their name to the Nambya, and their King, Dende, also renamed himself Sawanga, later Wange, from where the park takes its name.

Born in 1862, Percy Durban Crewe had worked as a miner in Barberton and Johannesburg in South Africa during the country’s gold rushes, but failing to make his fortune ventured north into Matabeleland (western Zimbabwe) in 1893.

Percy established himself as a confidant of King Lobengula, ruler of the Ndebele people (formerly called the Matabele), and was instrumental in a bid to avoid a war between the Ndebele and white settlers, who were crossing the border in increasing numbers.

Trusted by the king, Percy and two of the Lobengula’s retainers were sent south to Cape Town to carry a letter to Queen Victoria, pledging the King’s support for the foreign crown and asking for her sovereignty to be respected.

Percy and his party faced delays and a parallel peace mission ended in disaster when the king’s other ambassadors were detained, tried to escape, and were killed.

There are various historical accounts of Percy’s fondness for partying, one of the most telling from his own memoirs. Crewe’s return from his failed mission to the Cape was delayed by the fact that one of the King’s men, M’tjete, had become ill with dysentery. Meanwhile Percy himself, in his own words, was having ‘a very pleasant time’.

King Lobengula had given Percy money for expenses on the journey south and the British had agreed to cover his costs for the return journey. However, a Civil Commissioner (CC) queried Percy’s expenses claim.

Percy recalled: ‘At Mafeking (in South Africa) I put my account into the CC who said the liquor bill was too high. I told him I was keeping M’tjete alive on port and champagne.’

Percy went on to fight in the war he had tried to stop and after the conflict ended, with the Ndebele defeated, he tried his luck prospecting for gold. He failed to strike it rich, but worked for a time in Bulawayo as a trader and later bought a farm in the north west of the colony by then known as Rhodesia, on the border with Bechuanaland (modern Botswana).

He called the farm Nantwich, a play on his own name – the towns of Nantwich and Crewe in England are close to each other. He farmed cattle and, for a time, took part in an experiment to grow sugar cane, which failed because of frost.

In between occasional prospecting trips Percy lived at Nantwich Farm with an Ndebele woman named Vuvuka, who, perhaps knowing another route to Percy’s heart, was famous in the local area for the potent beer she brewed.

Percy died in 1931, leaving Nantwich to his brother, Harry, and niece Ursula. They took on the challenge of cattle farming in the wild lands, which today, as then, were known for their high density of lions.

In 1961, as tourism infrastructure in the park was expanded, construction began on three two-bedroom self-catering cottages overlooking Nantwich Dam. When completed, Nantwich Camp gained a reputation as a hidden jewel. A few years later the Wankie Colliery Company, located in the town of Hwange, was given permission to construct a three-bedroom exclusive retreat, Isilwane Lodge, on the edge of the dam for the use of the mine’s executives and visiting VIPs.

Declining visitor numbers during troubled times after the turn of the millennium led to Nantwich Camp being leased to a hunting outfit. The cottages were used as staff accommodation and workshops and Isilwane Lodge, which by then had been handed back by the colliery to Zimbabwe Parks and Wildlife Service, was used to house the hunters’ clients. The hunts were carried out in the nearby Matetsi Safari Area.

When the hunting concession ended Nantwich fell into disrepair and was abandoned. An attempt by the Parks and Wildlife Service to renovate the camp was crushed by a fire, which destroyed one of the chalets and much of Isilwane Lodge.

In 2018 Hideaways and a small consortium of investors, including international thriller author Tony Park and his wife, Nicola, obtained a lease to rebuild the camp as a luxury lodge. 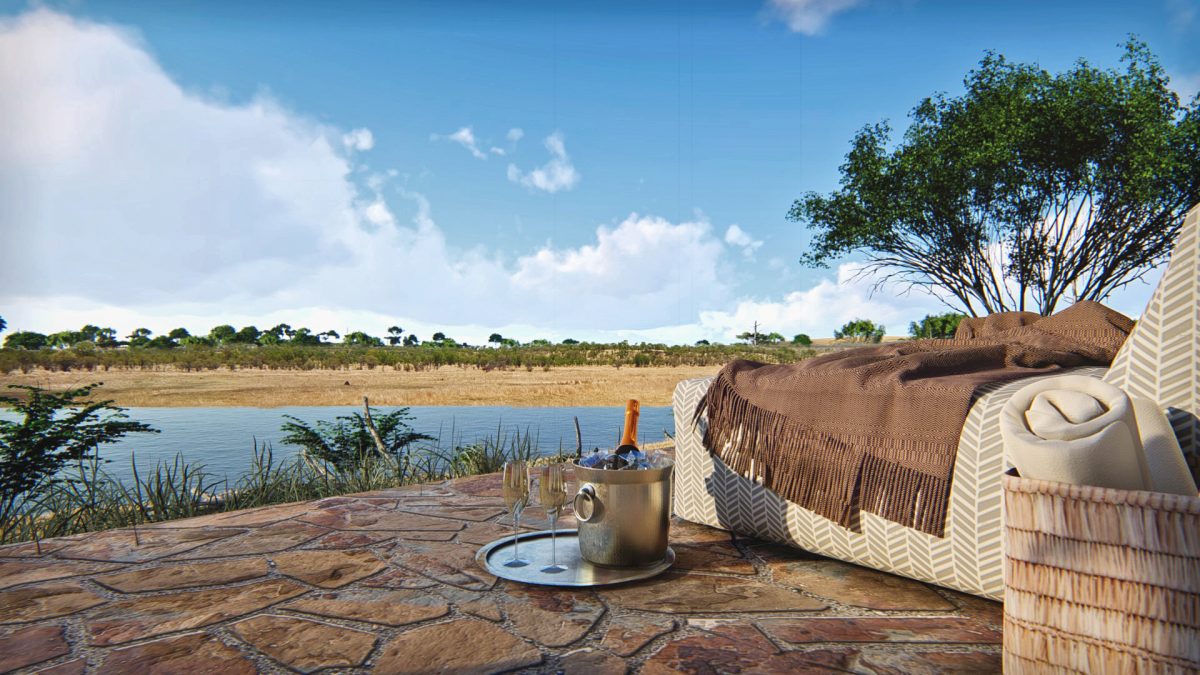 The three self-catering cottages were rebuilt and repurposed as three units of three rooms each, retaining as much of the original structures and character as possible. Isilwane Lodge was likewise resurrected as the lounge and dining building on the edge of the dam.

Hideaways is proud to welcome you to Nantwich Lodge. If you have time, visit the grave atop the hill behind the accommodation units, where Percy Durban Crewe, a man who loved life as he did Africa and her people, watches over Nantwich.

When travelling to Zimbabwe, a visit to Hwange National Park is a must and should be part of any Zimbabwe…
Read More
PreviousWe Have Been Featured In Travel Africa Magazine!
NextA Walk with the Elephant’s Eye, Hwange Anti-Poaching Unit