Whispers of the Wild: Mana Pools

Located in northern Zimbabwe, on the banks of the mighty Zambezi River, Mana Pools Safari Lodge provides a true ‘out of africa’ experience. It’s remote location deems the park largely untouched, the wild maintaining sovereignty. Being on the Eastern border of Mana Pools National Park, the area shares ancient wildlife corridors with Zambia, its grand Zambezi Valley Escarpment the backdrop to the horizon. This element of the untamed, coupled with that of the river flowing through, creates a haven for wildlife.

Mana’s allure lies in its wildlife, its location, and its light. Dawn and dusk blanket the park in different tones. Particularly beneath the Albida trees.

The forest is one of a kind, enchanted in nature, its magic enhanced by sunlight kissing bark and earth. To observe the character of Mana Pools, one must rise even before the sun to witness the blue hues through the trees, the colour of emergence from night. The pastel blue seems to sit between earth and sky, hanging in the morning mist as if waiting to ascend to greet the world above. As you gaze through the cathedral of acacias, their green foliage a contrast to the blue below, an elephant emerges as if a mirage, appearing through the mist. Evening takes on a golden glow, the park held in a mesmerising warmth.

Elephants, although giant in stature, are surprisingly quiet – gentle footsteps passing akin to a hushed conversation. A snap of a twig or the low rumble of communication may alert their presence, which up close is all consuming and a sensory explosion – to only disappear again in a whisper. A trail of broken twigs and disturbed earth the only evidence of their passage. 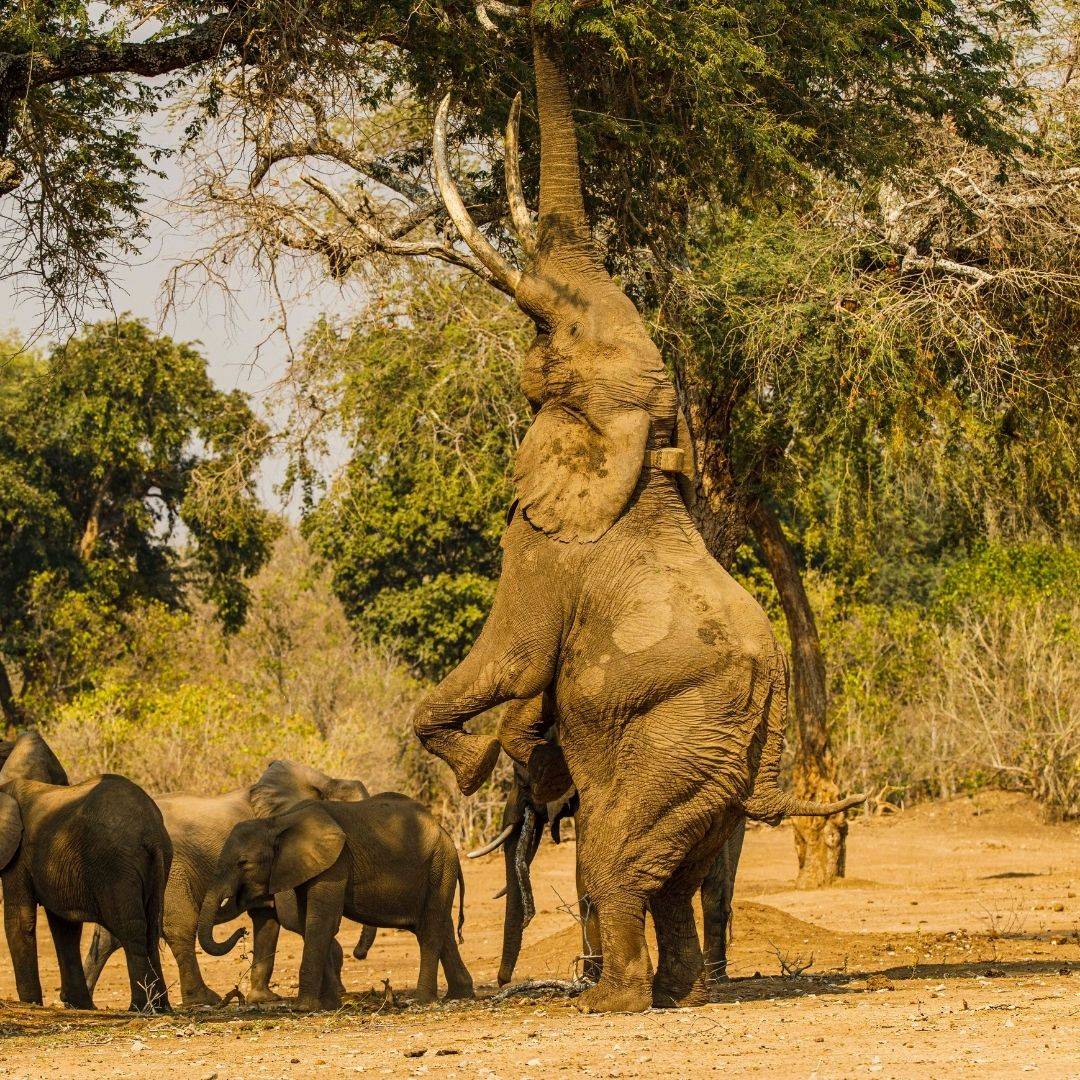 To witness an elephant in its natural habitat is itself a spiritual experience – awe-inspiring in their innate wisdom and way. The Mana Pools elephants then gift us with something even more breathtaking – a vision of pure determination, adaptation and awareness. Balancing on their back legs they reach up to the juicy branches above, relishing in the albida pods, the ultimate delicacy. This skill was born out of the necessity for survival in the dry season, where food becomes scarce within the park. The lower branches of food have been diminished by other elephants and browsers alike, each species searching for nutrients as rainy season becomes a distant memory.

Mana magic comes in many forms – its light, its elephants, its albida trees, the backdrop of the escarpment to its lifesource; the Zambezi River. Embark on a journey of ever-changing hues dappled beneath acacia forests, gentle giants emerging from morning mist, prides of lion waiting in golden grass, immersed in the whispers of the wild.