A familiarization trip to Elephant’s Eye

In May, our marketing specialist Pierce Synnott went on an agent familiarization trip to Elephant’s Eye, Hwange to explore the exciting wildlife and activities on offer in the region, below he tells us about his incredible trip:

On arrival, we got a bit delayed at Zimbabwe border post and spent some time there so we were a bit late arriving at Elephant’s Eye, Hwange. However, we still managed to do a brief game walk and then had sundowner drinks at The Eye which is the lookout and sleep out deck, followed by dinner at the lodge. 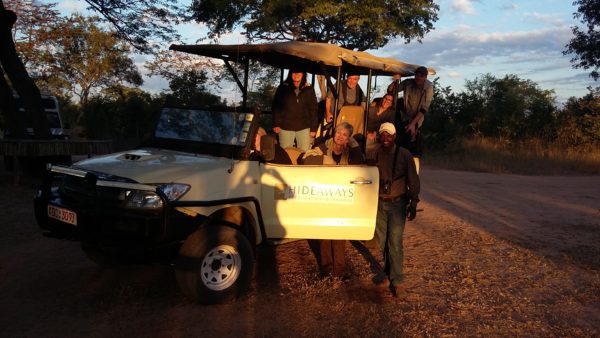 Next day we went on a full day game drive right into Hwange National Park where we had awesome game viewing. You need to work a little bit harder to see or find the animals there but it’s well worth it. Our guide, Mash, tracked lion spoor for quite a while, he really went out of his way to find these lions. We came across 2 old buffalos, one with a scratch down his side who was pretty anxious and jumpy – he’d clearly been attacked by a lion so we knew they were close.

We continued tracking the spoor and eventually found them, being typical lions, sleeping under a tree. It was great of our guide to track them down. We also saw beautiful giraffe, a whole journey of giraffe interacting. One dirty old man giraffe trying to mate with a young lass who was having none of it, so there was a bit of chasing and fun. So that was a nice giraffe viewing. Then we finished the day with an elephant viewing down by the waterhole, there were literally hundreds of elephants coming and going and playing and splashing in the water and trumpeting, so we just stayed there for a long time watching that. We actually stayed so long we ended up getting back a bit later than planned but it all worked out ok. There is definitely really good game viewing in Hwange. Really good skies as well, beautiful light. 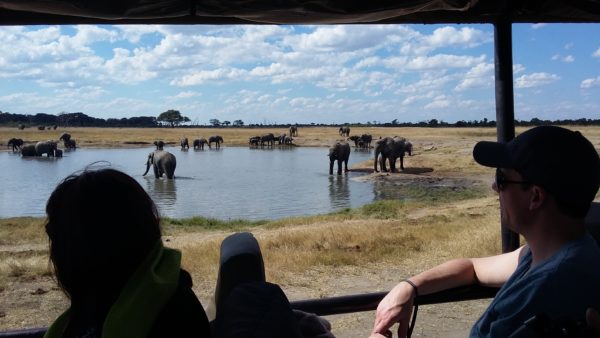 When we got back from Hwange we went across to Dingani Primary school which is a school that the Grow Africa Foundation supports. We arrived to the kids singing songs for us and we got a huge welcome, which was lovely. We had received quite a lot of Pack for a Purpose items so we had a nice big handover, chatted to the kids, told them where we were from – we had agents from Canada, Portugal, and South Africa. After that the agents went to paint one of the classrooms. The school needs a lot of help with maintenance and upliftment. We’d organized that the walls were already painted nice and white and then with the agents did stencils of animals on the walls. For everyone, the visit to the school was one of the highlights of the trip as it was very moving and inspirational. 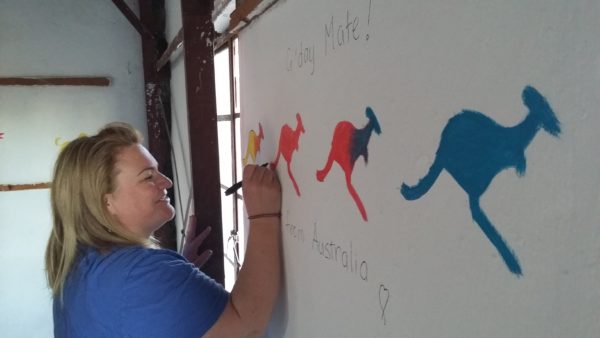 Back at the lodge we were treated to a dinner in the bush. So after showering and freshening up we got back into the vehicle to drive 20 minutes into the bush and arrived at a waterhole with a big fire going and a table all set for dinner. The food was cooked/braaied on an open fire.

That was our stay at Elephant’s Eye. The accommodation was really beautiful and all tents overlooking the waterhole. At the lodge itself we had elephants come down and buffalo and some smaller antelope. So plenty of things happening at the lodge as well which was very nice. 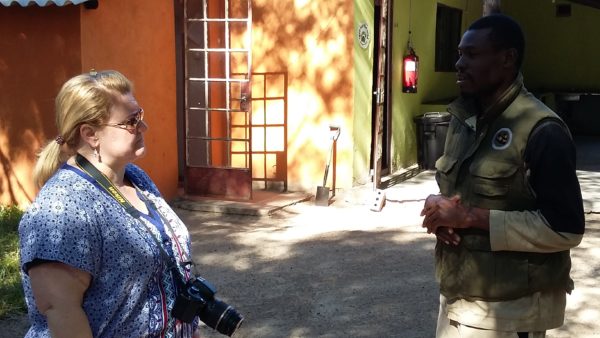 The following morning we bid farewell to Elephant’s Eye and made our way across to the Painted Dog Centre, which is a rehabilitation centre for the injured and endangered African Wild Dog. We had a quick introduction to their project which was well worthwhile and an interesting visit, and we saw some of the Wild Dogs that they have at the moment.