There is no sound more distinctive and bone-chilling than a lion roaring in the night, informing all that can hear that they are guests in his kingdom. These majestic and regal creatures bring travellers from all over the world to Africa’s game parks and are usually at the top of their must-see lists.

An encounter with a lion in the wild is one you’ll never forget. Spotting one of these beautiful beasts while out in an open-top safari vehicle is a stark reminder of your own mortality, knowing that one wrong move by you could cause the beast to strike and with one swipe of his paw or the crush of his jaw do some serious damage if he were so inclined. While it would seem this apex predator should have nothing to fear, sadly their numbers are fast declining and it is us who are their biggest and only threat… and potential savior. 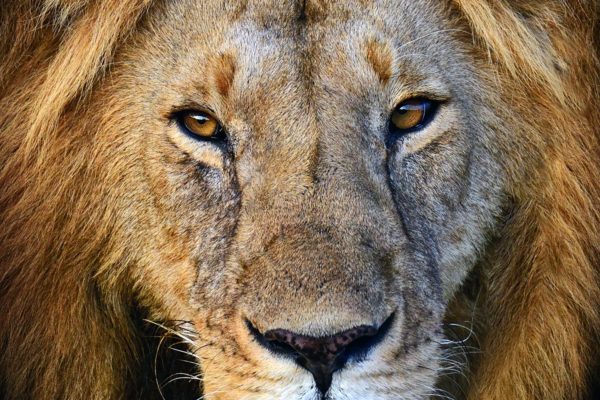 In the past two decades, the number of wild lions in Africa has plummeted by roughly 40 percent. Some estimates put current numbers as low as 20,000 in Southern Africa, with more conservative estimates calculating that the number is close to 12,000. Lions are now listed as vulnerable on the IUCN Red List. A century ago there were around 200,000 lions but now only a tenth remain. What has caused such a devastatingly drastic decline?

Unfortunately, all threats to lions are human based with the top four being habitat loss, trophy hunting, poaching and human-lion conflict. There are currently more lions in captivity than there are in the wild. Unless urgent action is taken, one day there may be none left. 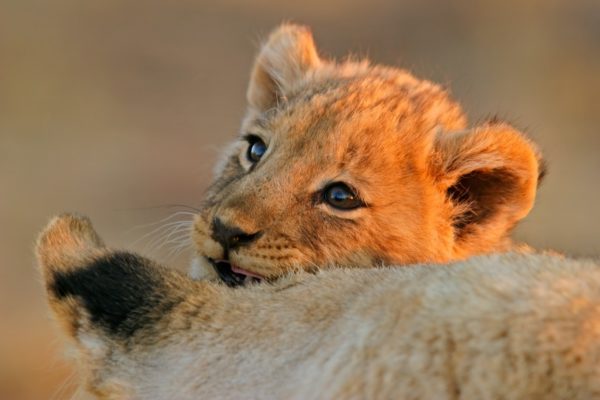 Numerous organizations in the tourism and conservation industries have identified this as a concerning issue and are focused on tackling it in effective and targeted ways. They do this by establishing the specific threats in their region and determining how best to combat them. 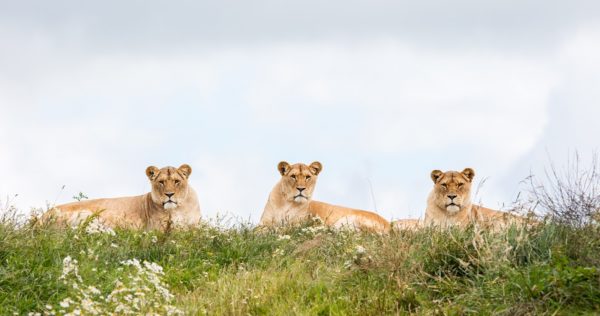 In general tourists are aware that Africa’s wildlife is under threat but they may not realize to what extent or why. As Hideaways, we want to bring their attention to the situation, especially the causes and what is being done so that they can make informed decisions and become part of the solution.

Human encroachment is the largest threat to lions’ existence. The grasslands where they roam are decreasing in size by the day, instead providing fodder for cattle and other livestock, or disappearing due to urbanization. A solution is desperately needed for humans and wildlife to coexist. Game reserves provide the best protection for animals in Africa and as long as they are financially viable, providing employment and stimulating the economy they are an incredibly valuable tool for conservationists as well as the citizens of the countries they are found in. Regarding agricultural expansion conservationists are working closely with communities to focus on education and prevention, teaching better animal husbandry practices and raising funds for reinforced fencing and other preventative measures. 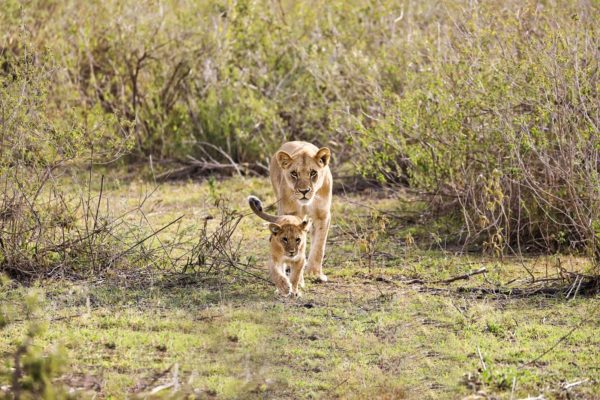 Regrettably, bushmeat poaching is on the increase throughout Africa. Poachers typically use snares, a wire noose that is placed along trail lines, trapping and killing any animal above a certain size. This indiscriminate way of killing has devastating effects. The snare is an almost flawless killing machine: practical, inexpensive, lightweight, simple to make, easy to set up, silent and virtually impossible to escape. These snares are increasingly being found across areas where humans and wildlife coexist. Devastatingly, more and more lions are falling prey to these snares, both intentionally and unintentionally. Conservation organizations and game park employees are working to clear them as fast as they can, some lodges even provide it as an activity for their guests who want to make a difference.

A lucrative market for lion poachers is the Lion Bone trade. As the Chinese have recognized the need for tiger conservation, they have found an alternative: lion bones, believing it to have the same medicinal effects. Recently the South African government made the controversial decision to allow the export of 800 skeletons of lions bred in captivity, arguing that if the trade was prohibited people would simply look elsewhere and resort to poaching lions in the wild. Conservationists argue that this is essentially driving up demand which also motivates poaching, and they are fighting to make their voices heard. 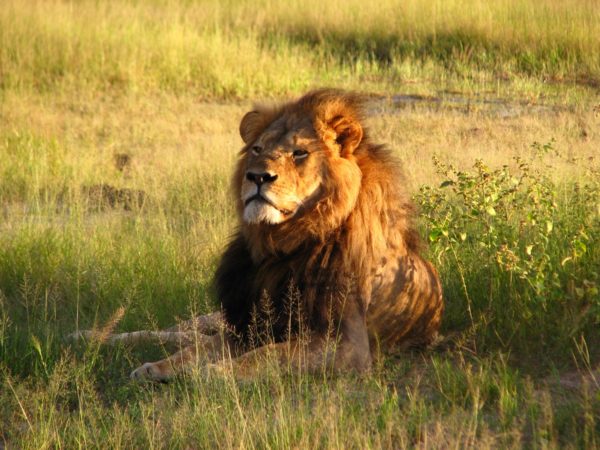 Trophy hunting remains a hotly contested issue. With proponents proclaiming it fuels conservation by protecting large areas of land from human encroachment and channeling money to conservation projects. However, detractors insist that the conservation benefits are minimal or even non-existent. They also believe that demand is fueled by the byproducts of trophy hunting such as skins, bones, and other materials finding their way onto the black market. 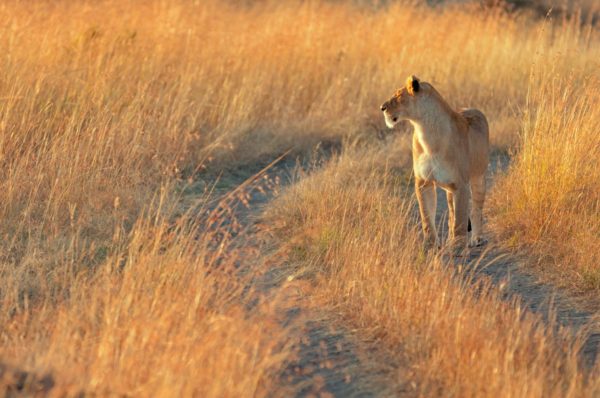 In Zimbabwe, including around Hwange, hunting is not allowed in the national parks but nearby concessions are another story. Unscrupulous hunter guides are luring the lions out of the parks in order to obtain their trophy, which some say was the case with Cecil the lion.

The infamous case of Cecil the Lion, who was shot by an American dentist in 2015, caused international outcry. Cecil was a well-known 13 year old black-maned lion in Hwange National Park, he was tagged and was being studied by a group of scientists from Oxford University as part of a project that had run since 1999. Cecil had wandered out of the fenceless national park onto a farm and was baited with elephant meat. An American hunter, led by a South African hunting guide, shot Cecil with a bow which did not kill him immediately. He had to be trailed and shot again later. News of his killing spread like wildfire through social and traditional media. People were outraged and emotions ran high. In the end no one was charged with any crime as charges were “too vague” but the incident remains the biggest global wildlife story and raised over US$ 1 million for Wildcru, the Wildlife Conservation Research Unit part of the Zoology Department at Oxford University who were tracking and observing Cecil. 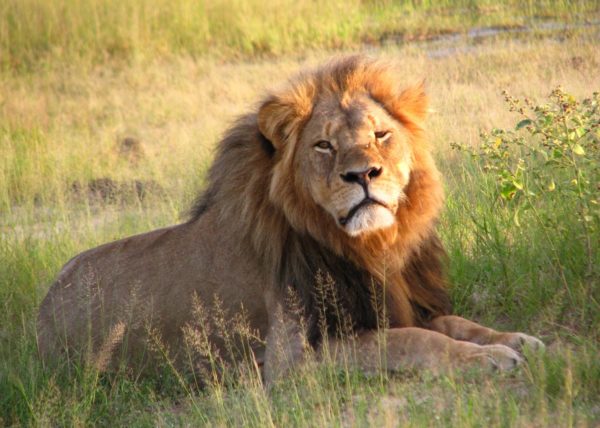 The Devastating Impact of Poaching and Trophy Hunting on the Pride

Poaching, especially with snares, is indiscriminate so lionesses, alpha males, or even young potential alpha males are removed from the pride with damaging effects.  When lionesses are killed the impact is far reaching as it eliminates the possibility of future cubs being produced. When an alpha male is killed he leaves an opening in the pride, which other males seek to fill. The new male will kill cubs in the pride to stimulate the lionesses to breed again. Trophy hunters target the best specimens, the alpha males, in turn influencing the number of the pride if there are cubs. Selective removal of dominant males also affects the genetic make-up of a pride, removing the sought after characteristics from a gene pool and greatly weakening it. 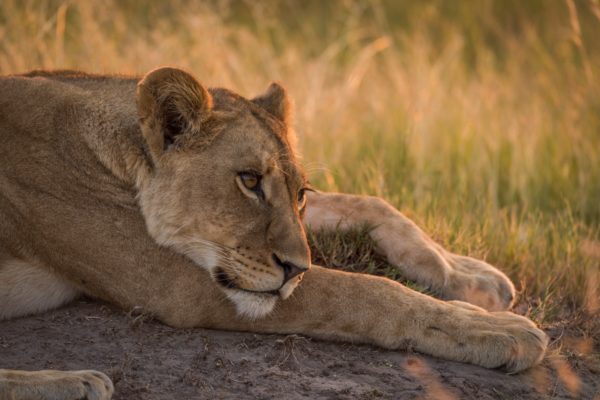 Combatting the Issue with Dedicated Conservation

The Conservation and Wildlife Fund (CWF) is a non-profit trust formed out of a collaborative group of concerned conservationists and stakeholders in the Hwange National Park region, with a goal to take action on critical conservation issues affecting the area. Hideaways is a founding member. The CWF has identified the lion population decline as a critical issue and are working hard to combat this problem. Members of the CWF are raising funds through conservation levies and bed fees at their lodges. These funds are allocated to the deployment of additional anti-poaching units on the peripheries of Hwange; coordinating and supporting the efforts of the various anti-poaching teams that have been set up by NGOs and operators around Hwange and providing support to the law enforcement efforts of Zim Parks, Forestry, and the Gwayi Conservancy. 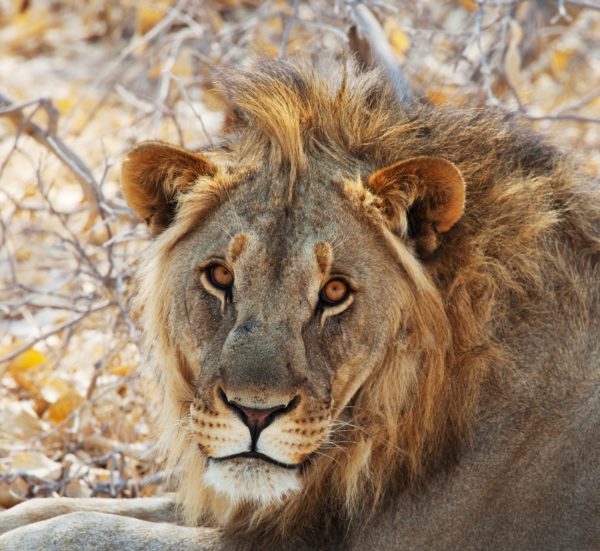 When it comes to lion conservation, Panthera is one of the biggest and most effective organizations in the world. It is the only organization that is devoted exclusively to the conservation of the world’s 40 wild cat species and their landscapes. They are on the front lines, fighting to stop poaching, preventing conflict with people, conserving wildcat habitats, and reducing unsustainable legal hunting. They work closely with local conservation groups, such as the CWF, to impact real and lasting change. Their proven strategies don’t just protect wild cats—they also protect their vast landscapes and the endless variety of life within them. 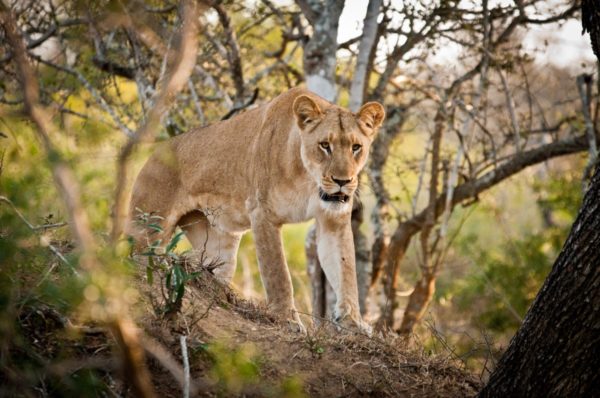 Senior Director of Panthera’s Lion Program, Dr. Paul Funston declared that: “I want to hear lions roar throughout the protected areas of Africa, and I am not willing to contemplate a world without 30,000 or more wild lions.” Hideaways along with the CWF strongly agrees with this statement. To help us create further awareness and combat the issue, please visit the CWF website to see how you can help.