International award-winning author Tony Park speaks of how a casual holiday to Africa turned into a life-long obsession and career. Spending time getting to know Africa beneath the surface and beyond the romance of sunsets, Tony explains how Nantwich in Hwange National Park became his muse.

Tony, with all your international experience as a press secretary, reporter, Australian solider and time spent in Afghanistan – why is Africa your muse?

Freedom. In Africa I feel free of the shackles of the rat race, of the pressure to perform or conform. Armed only with knowledge and respect, we can travel into the last truly wild parts of the world, safe in the knowledge that if we listen to the people who were born there, learn from them, and respect them and the wildlife and wild beauty of the continent, we will come out of the experience changed, and better for that change.

In 1995 my wife and I came to Southern Africa on a self-drive holiday. We drove through South Africa, Botswana and Zimbabwe. We got hooked. Whether you breathe something in or drink something in, or something bites you in Africa – you get hooked! No two days were the same. It was a totally unpredictable holiday, with no plan or plot or structure, and we have been back every year. It is on these journeys where I find my inspiration, enjoying the process of unpredictability, and have written a book about Africa every year as a result.

I feel like you have had a love affair with Africa. When did you first fall in love?

A love affair no – addiction – yes.

When you really spend time in a place, you see the things that are not all good. The more you learn about the underbelly of things through travel, you understand it’s not just about the big 5 and blood red sunsets, but Africa still sucks you in.

I think the addiction probably kicked in on about the second or third day of our very first trip, back in 1995. We realised very quickly that what was supposed to be a once in a lifetime holiday would be anything but.

What is the essence of Africa to you?

I’m lucky enough to have a house in a game reserve in South Africa, as well as being involved with Nantwich Lodge and both places show me, time and again, that with respect and understanding humans and wildlife can live in harmony, side-by-side.

African countries do this type of co-existence and tourism better than anywhere in the world. So the essence of Africa, to me, is harmony – being at one with nature in a way that benefits humans and the natural environment alike.

Ancestors, missing treasures, the war on anti-poaching, political corruption and the ivory trade, amongst many other sordid themes within Africa’s history – how and why do you select the stories you tell?

The stories tend to select themselves. Maybe a conversation by a fire. Or an article in a newspaper. The idea for ‘The Hunter’ –  set at Elephant’s Eye – was born through a conversation with a private investigator around the campfire. The books are set where I spend most of my time, in National Parks and wild areas. As a result, my books have looked at issues in these places, such as poaching, conservation, and the plight of endangered species – even plants in my forthcoming novel, Last Horizon, which is partly set at Nantwich. 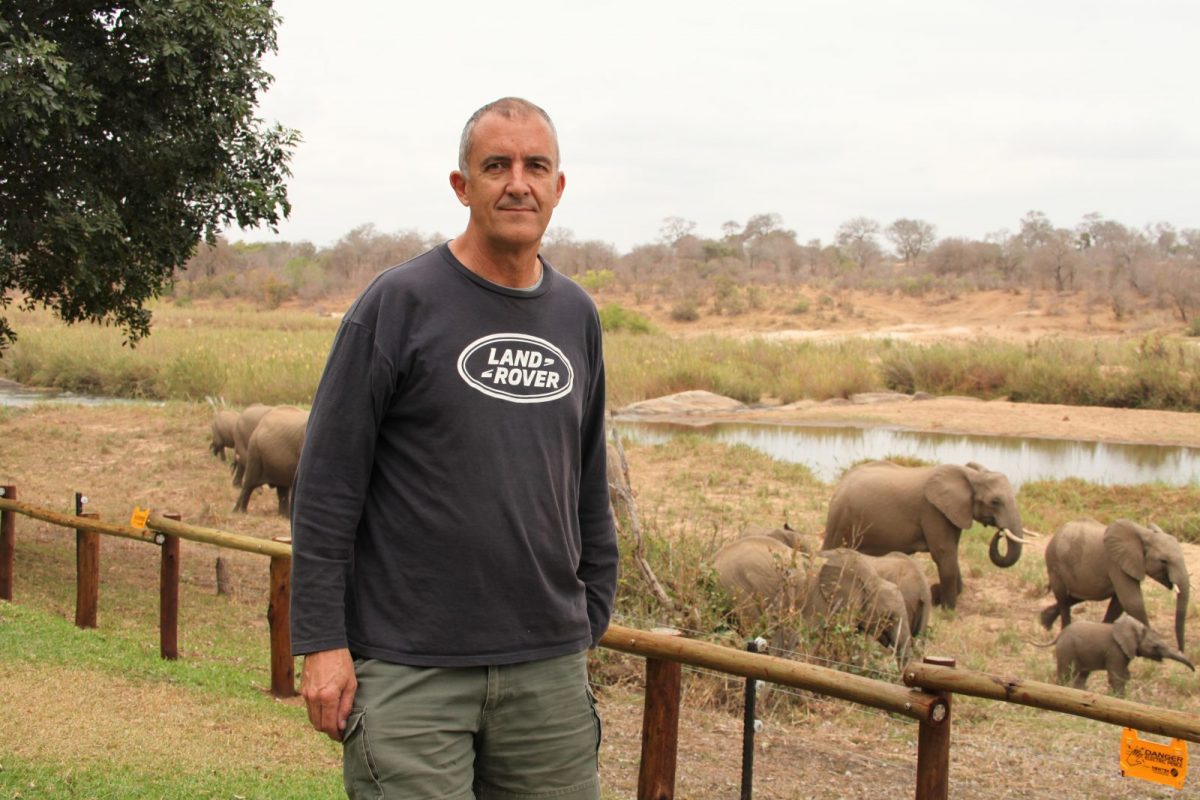 If you were to describe Africa, perhaps particularly Hwange, by using your five senses – what words would you use?

Hwange is the sight of vivid colours and contrasts – a zebra, perfect black and white against dry gold grass and a blue grey sky pregnant with the promise of rain; it’s the sound and undisputed power of lion calling at dusk or dawn; the sweet smell of the first rain on parched dusty sandveld; it’s the taste of chef Enoch’s home baked rusks and hot coffee on a morning game drive, watching elephants drinking from a waterhole; it’s the luxuriant cocoon of a hot bath or shower at Nantwich keeping the chill at bay under a star-studded night sky.

You refer to Nantwich Lodge in Hwange as “My little corner of Africa.” Can you tell us why? What is the particular allure/magic about this area?

My wife and I have spent a lot of time there. During hyper-inflation and economic collapse in Zimbabwe several years ago we would stay at Nantwich for months at a time, while it was still run by National Parks. My fourth book, ‘Safari’, was started in Nantwich and is also partly set there.

My wife and I saw our first lion kill at Nantwich, while eating lunch. I literally wrote some of my earlier books at the dining room table, watching a never-ending parade of wildlife coming and going, and life and death being played out in front of me.

We are currently running an Ernest Hemingway Challenge – I feel you would be a fantastic contender! If you were to create a quote that embraces time spent and experiences had in Africa – what would that quote be?

Africa is how the rest of the world would secretly like to be. It’s only in the wilderness that we can be truly free and wild, in tune with the beauty of nature. Anyone who has not experienced it is the poorer; those who have visited spend their lives longing to return.

If you were to suggest a book about Africa for our booklist, what would it be and why? (from another author of course!)

‘Hold my Hand I’m Dying,’ John Gordon Davis. It’s probably the best novel I’ve read about everything that is good, great and tragic about the African continent. It’s a story of love, between a man and a woman, and a man and Africa.

Many years ago, I was staying in Nantwich, but took a drive to the Sinamatella area of Hwange National Park, where there are still some rhino to be found, though they are highly protected and very secretive by nature, not often seen.

My wife and I were driving in our old Land Rover and noticed rhino tracks on the road.  I followed the tracks, came across a fully grown black rhino, and she charged us.  The rhino followed us for five kilometres at speeds of up to 40 kph.

It was exciting, but terrifying. I later learned from a ranger that this rhino, named Chewore, was famous for chasing Land Rovers. She had been orphaned as a young calf – poachers had killed her mother – but had been hand raised by parks rangers. Whenever she saw a Land Rover she thought it was the food truck!