Mana Pools National Park, Zimbabwe, is famous for its  bold and beautifull wildlife, especially its elephants. Balancing on their legs and stretching their trunks to the sky, they patiently and skillfully pull nutritious leaves and pods off seemingly unattainable branches. This skill has been mastered in order to survive the dry season, where food becomes scarce among the species, the elephants using the resource of their strength and the flexibility of their trunks. 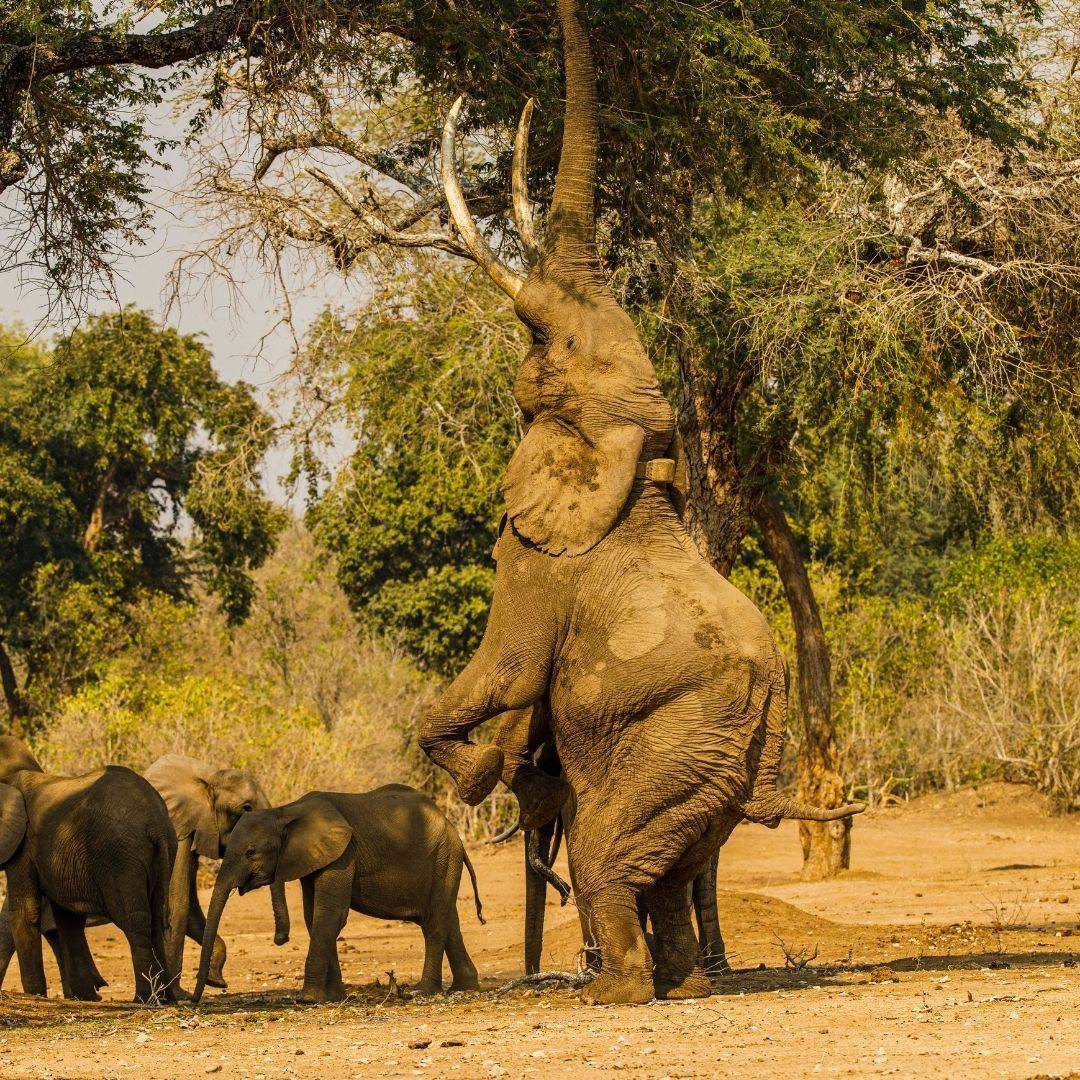 Their taste buds are famous for seeking the flavours of the Africa Albida pod – otherwise known as the Winterthorn, one of the few trees which blossom during winter. These pods are like biscuits to elephants, a delightful snack which keeps them returning for more keeping their hunger at bay and us entertained. The trees are part of a very special forest specific to the area, one which rises blue with the sun and ends the day in golden hues. The albida forest is both food for the soul and the surrounding wildlife.

Such forests are able to exist due to the life source of the mighty Zambezi river. Although inland, during the rainy season the river fills up enough to overflow and replenish four inland pools, sustaining the park throughout the dry season. This includes the larger mammals, surrounding trees, reptiles and insects, and a myriad of birds. Mana Pools Safari Lodge encourages expeditions on both foot and vehicle through the park, observing the wild at all angles. Led by a private guide, this experience will have your curiosity in full flight. 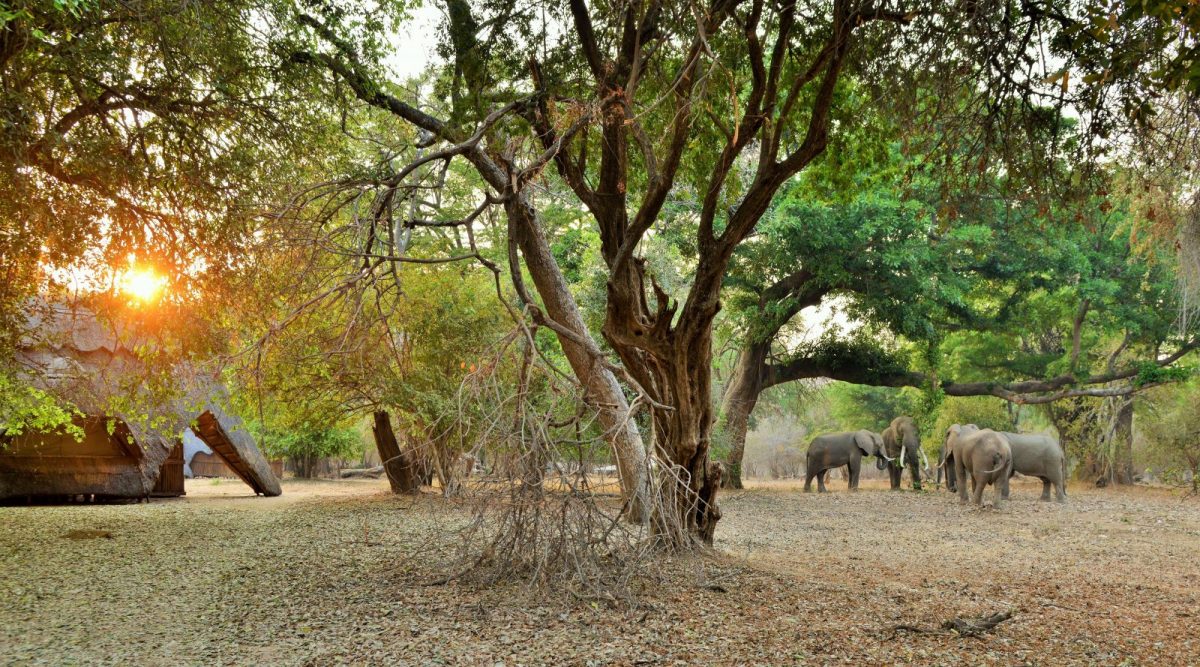 The river itself, inland pools, albida forests, acacia woodland as well as open savannah create a variety of habitats which home over 380 bird species. Riverine birds include the iconic fish eagle, the African skimmer, the rare rufous-bellied heron and the elusive Pel’s fishing owl. These are not your average bird sightings, raising the birding bucket list another bar. To simply hear the sound of the fish eagle is magical; the sound of Africa echoing across the river, carried by its waters. Other riverine feathered friends such as yellow-billed storks, spoonbills and saddle-billed storks are fascinating to observe hunting for their prey, each using masterful skills and unique strategies. 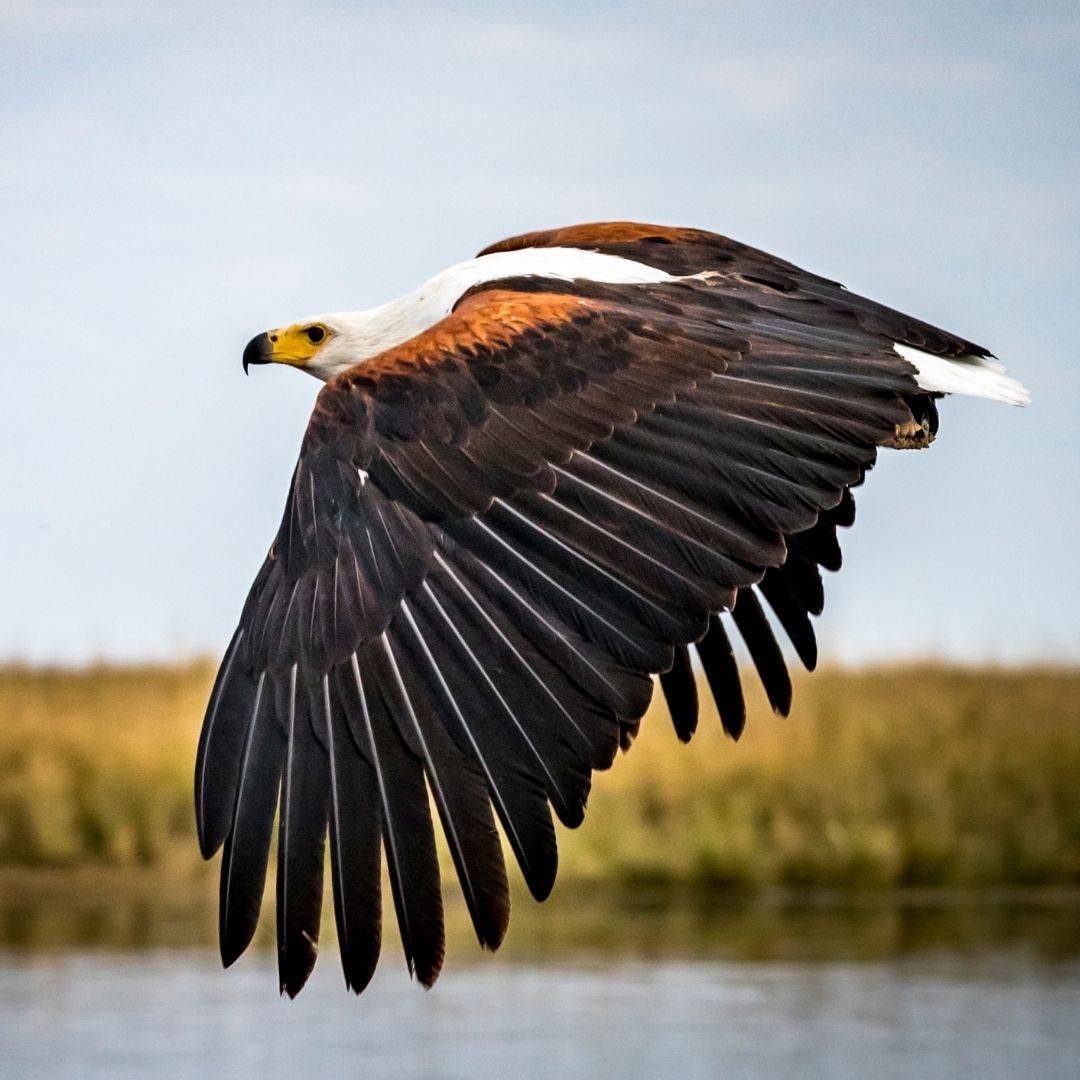 An intra-Africa migrant bird which decorates the brown banks of the Zambezi with bursts of colour is the Carmine bee-eater. Flying in from the equator in August to breed, nest and raise their young, they gift the park with iridescent blues and pinks – an absolute safari spectacle. Communal in nature, they help raise each other’s young, mirroring the ethos of an African village. Or perhaps it is through this observation that tribal communities learnt the nature of family. 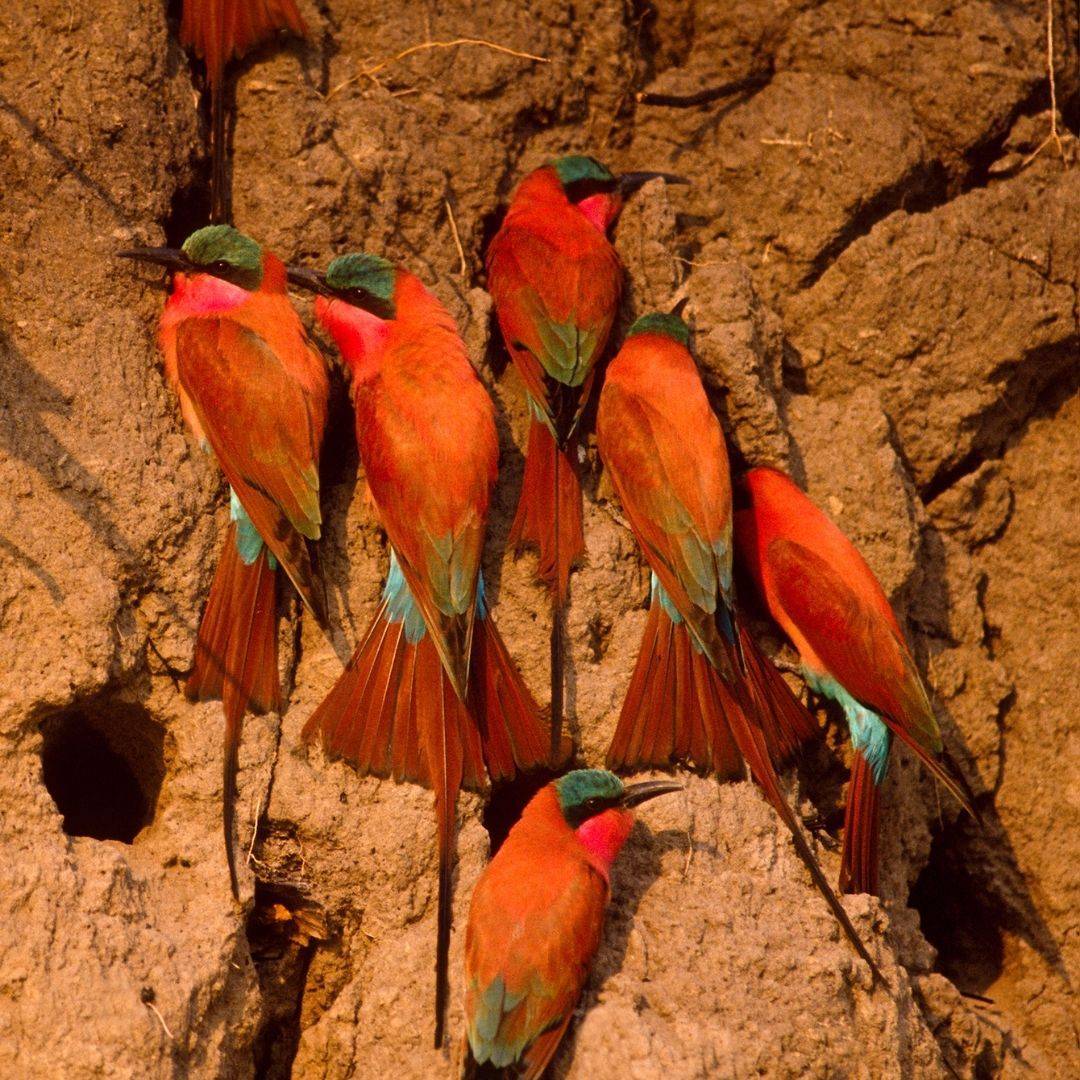 In the competition of iridescence, the bee-eaters are joined by the woodland kingfisher, shimmering blue from its chosen branch. Bold in pattern but not in colour – its black and white relative, the pied kingfisher, hangs out by the river, constantly fluttering above in search of fish. A favourite with its amber-coloured chest and speckled wings is the giant kingfisher; royalty of the bird kingdom. 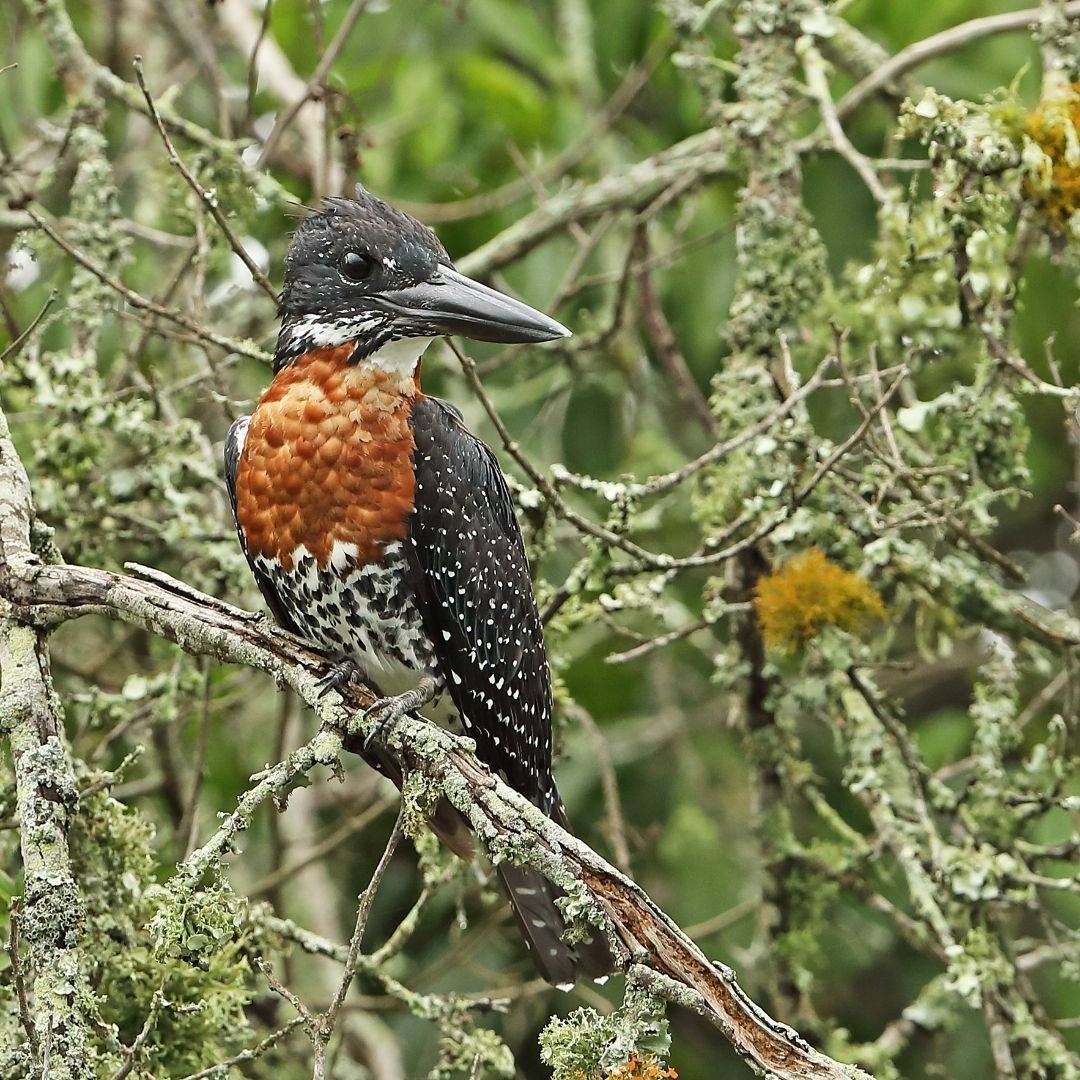 The lilac-breasted, as well as racket-tailed rollers, inhabit the woodlands, along with Lilian’s lovebird and the village weaver. Watching the weavers weave their nests is a mesmerising process, tiny little beaks making masterpieces for their future family. The female weaver then comes to inspect the efforts of the male, and if unimpressed, she rips it up and expects him to start again! Witnessing these dynamics also gives an idea of the cutthroat nature of nature, beyond the colourful coats and fabulous feathers.

Whether you are into the bold and the beautiful or the great and small, Mana Pools will have your heart a flutter with diversity. The key is observation and curiosity, keeping your eyes open so your mind and soul may fill with the essence of this wild wonder.