In the African wilderness, there is a moment at the end of the day known as the ‘golden hour’. It exists in the transition between dusk and twilight, a moment of unspoken truce and peace as daylight disappears below the horizon. Golden light touches the earth in gratitude and acknowledgement of mother nature, appreciation for great and small, before night descends. 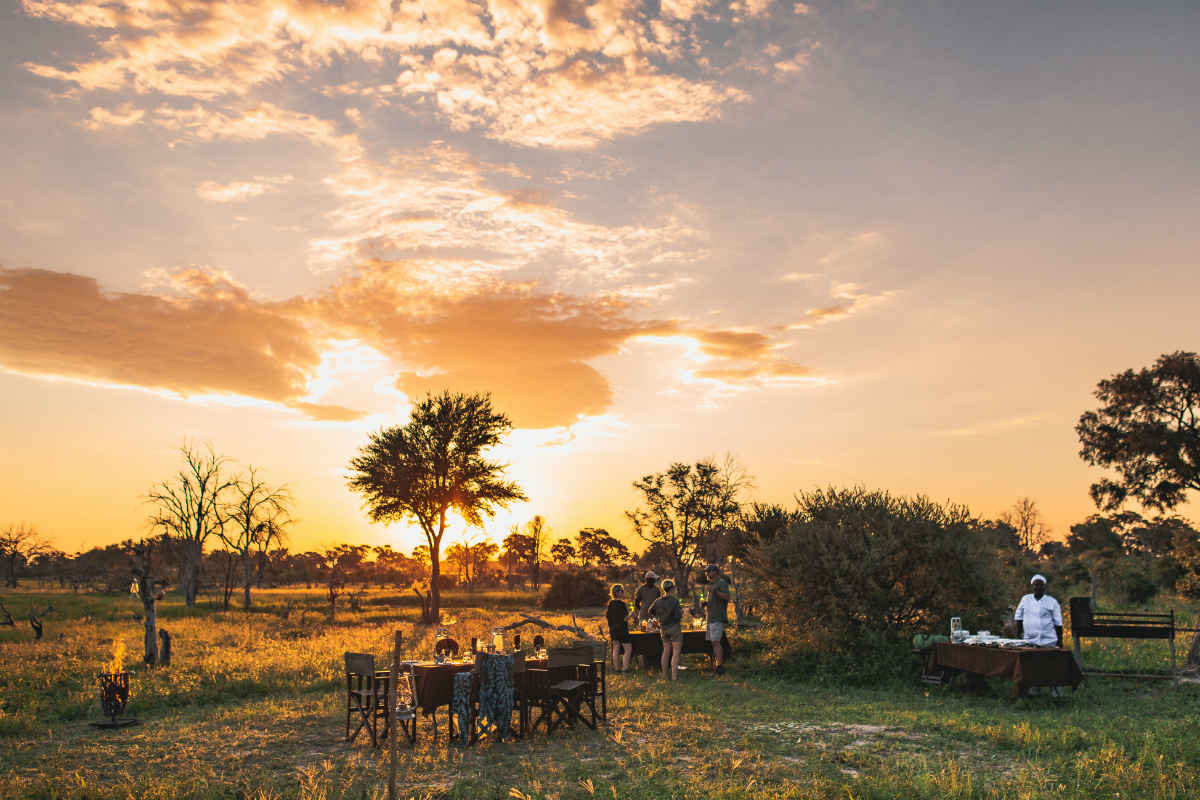 A distant and mournful call of the black-backed jackal serenades the evening. Accompanied by the sombre call of the African night-jar, we are welcomed into the world of the African bush at night. Darkness brings a mystery to the landscape – sounds and smells and shadows of elusive nocturnal wildlife, the flint of an eye or hoot of an owl incites excited anticipation for what lies beyond the game drive vehicle.

Its fleeting nature makes the sighting so special, gifting us its presence for but a moment.

Night is an invitation to many of the smaller creatures of the wild, as well as predators; the timid and the tenacious sharing the terrain. Driving along, we search up in the trees for the giveaway orange eyes of the bush-baby, trying in earnest to follow as it leaps from tree to tree. Its fleeting nature makes the sighting so special, gifting us its presence for but a moment. Moving the torch from tree top to road side, we find the scrub hare bounding alongside the grass, mesmerised in the light of our vehicles, seemingly leading us along. The comical ‘Kalahari Kangaroo’ – the spring hair – bounces into sight only to dive into the closest hole when spotted, an unexpected sight in the African bush!

The experience is orchestrated by owls. The Khwai area holds a notable diversity of species – we could simply spend the evening on an owl safari alone! The Giant Eagle Owl and Spotted Eagle Owl are gracious with their presence, as we search for lesser known species such as the African Barred Owlet, African Scops Owl and the Southern White Faced Owl. As we survey the night sky and canopies of trees, the bone-chilling shrill screech of the Barn Owl fills the air as it flies overhead, its wings beating the night air. We stop to call the tiny Peal Spotted Owlet (no bigger than the size of a hand) and watch in surprise at how many respond and come to investigate.

The opportunity of finding a hunt and the thrill of following their trail leaves one in a humble realisation of the fragility of survival in the wild. Observing the silent and powerful communication between hunters, all senses heightened for both predator and prey, the air filled with electric energy of determination.

Hyena are bountiful in the Khwai area, a sighting quite probable. Their curious nature allows for up close and personal encounters, however when on the hunt, their blood-curdling call comes at a welcome distance. Night time is predator territory; leopard, hyena and lion out on the hunt. The opportunity of finding a hunt and the thrill of following their trail leaves one in a humble realisation of the fragility of survival in the wild. Observing the silent and powerful communication between hunters, all senses heightened for both predator and prey, the air filled with electric energy of determination. These moments are sacred and rare in the wild, the anticipation of finding them beyond the shadows is a journey in itself. 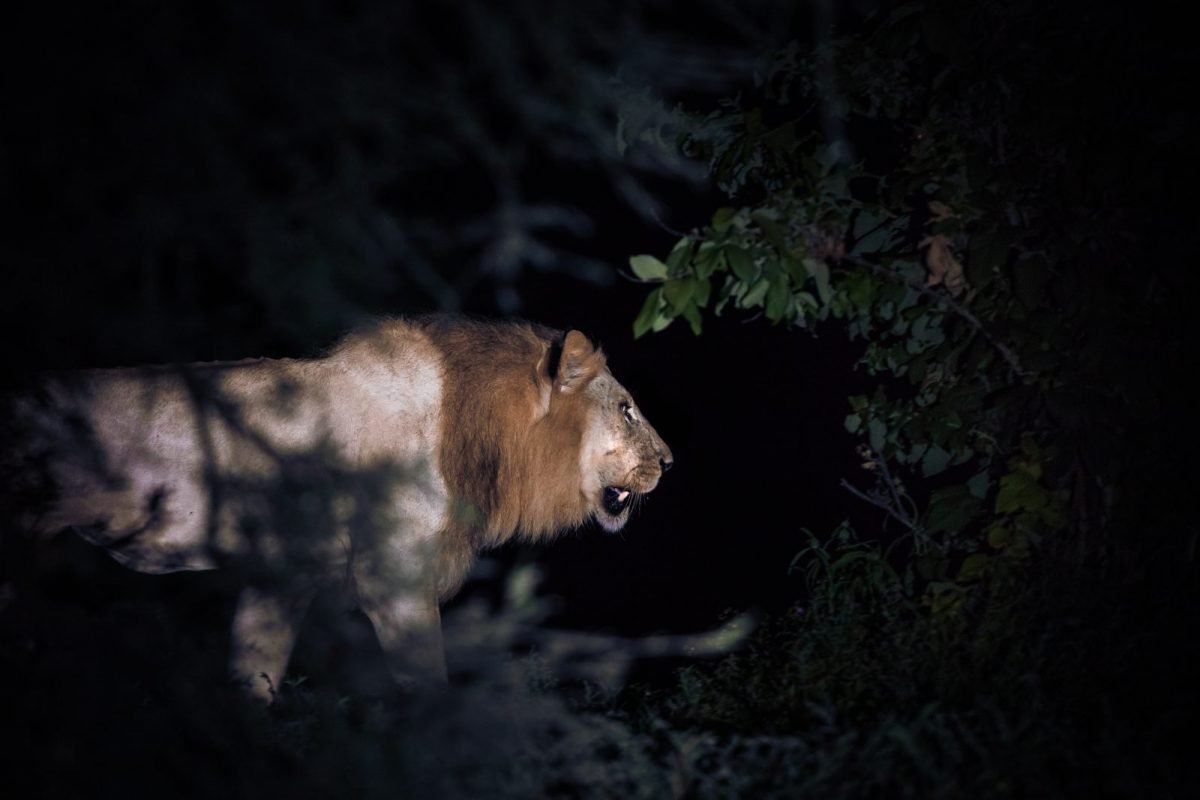 No night safari is complete without experiencing the absolute splendour of the African sky. We stop and witness the blanket of stars above in awe, a kaleidoscope of constellations. Searching for the Southern Cross, not seen by those from the Northern Hemisphere, a once in a lifetime experience for many. Taking a moment with all lights off, engine off, experiencing the full beauty of it, from horizon to horizon. Identifying other constellations such as ‘Leo’ – the great Lion, ‘Scorpio’ and ‘Orion’ – and learning of the Greek mythology associated with them (particularly how it came to be that Scorpio and Orion are forever chasing each other across the Heavens!) Shooting stars and satellites have us lost in the cosmos, utterly engulfed in the wonders of the world. 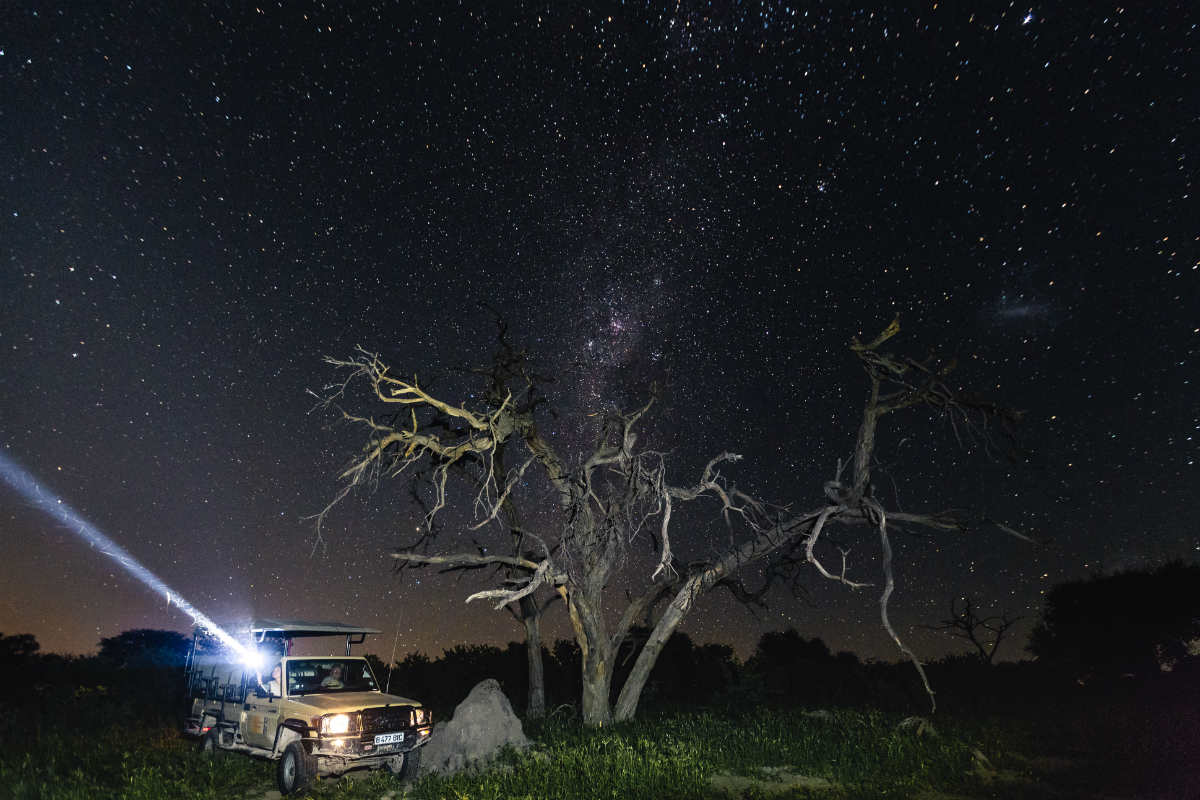 A night safari instills one with a sense of magic. Experiencing nature from dawn till dusk and beyond allows for a greater understanding of diverse characters, fragility, boldness and the sacred elusive nocturnal world.

Online Bookings
We use cookies to ensure that we give you the best experience on our website. If you continue to use this site, then you agree with this.I AgreePrivacy Policy