The History of Dhows – An Ancient Art

Dhows on the coast of Africa

The word daw is a Swahili word, the language most widely spoken in East Africa, where all along the coastline you’ll see wooden boats with triangular sails traversing the coastline with the monsoon winds at their backs. These are dhows, a traditional East African boat that has been sailing those very waters for millennia.

The word dhow is actually a generic term for a variety of traditional sailing vessels with one or more masts with lateen sails (a classic triangular-shaped sail attached to a cross beam that is raised and lowered according to the winds) found in the Indian Ocean or the Red Sea. Historians speculate that the dhow was either invented by Arabs or Indians and they were originally fishing or trading vessels used mostly to carry items such as slaves, fruit, fresh water or other goods, along the coasts of the Arab countries, as well as Pakistan, India, Bangladesh, and East Africa. Although originating in India or the Arabian Peninsula, it was on the East African coast where they flourished and are still in extensive use today. By reading through ancient Greek texts we see reference to these dhows dating back as far as 600 BC. They also formed an integral part of the terrible slave trade over one thousand years ago with traditional dhows transporting slaves from now Mozambique and Tanzania to the Arabian Peninsula in their thousands. 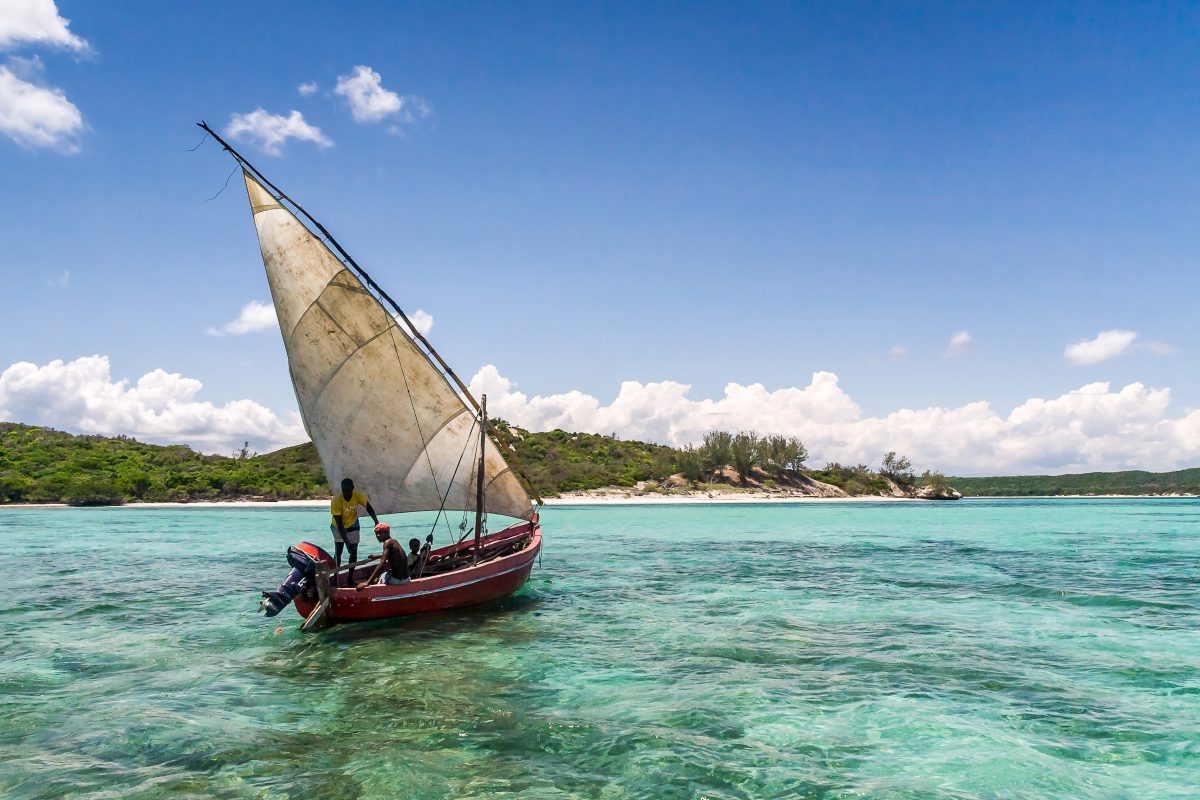 Still today, traditional sailing dhows in Africa set off on journeys between the Arabian Gulf and East Africa, using only the wind in their sails for propulsion top trade along the East Coast of Africa. On these commercial journeys where they mostly carry goods such as dates, fish and mangrove timber, the dhows will often sail south with the monsoon winds in winter or early spring, then return in late spring or early summer with the Kusi or wind from the south in Swahili.

The crafting of a dhow is considered an art, one that is passed down from one generation to the next. Traditionally it’s a lesson shared from father to son, using their bare hands and the same style of tools from ages ago. It’s a practice filled with respect to an ancient form that still holds up today.

The masts and yards were originally made of coconut wood and teak from India, but now a larger variety can be used. Sails were probably woven from coconut or palm leaves and the arrival of cotton (which was also from India) made longer voyages possible. What was especially unique about the dhows is that the planks were stitched together using rope or coir (a coconut fibre), instead of hammered with nails. Cotton soaked in coconut oil is also used to stuff any gaps, expanding when wet and keeping leaks out.

The system of dhows traversing along the East African, Arabian and Indian coasts had an enormous cultural and economic impact on this area. It made possible a steady flow and interchange of ideas, goods, religions, flavours, and skills. This sharing of ideas and building of an international community significantly predates the modern phenomenon of globalisation. As commerce was the main goal of these interactions there was a certain freedom that would later be stripped by colonial rulers arriving from Europe. Being at the mercy of monsoon winds, meant that sailors would spend some time in the various trading ports and interact socially much more than they would have on a quick stay. In essence, these dhows were a vehicle of dialogue between civilizations and very effective channel of communication, for instance, carrying the message of a religion like Islam up and down the African coast.

If you are interested in booking a dhow safari somewhere along East Africa’s coast then get in touch with one of our expert consultants here. It can always be an amazing add on to your safari package to Africa for an adventure of a lifetime.

PrevPreviousA Walk with the Elephant’s Eye, Hwange Anti-Poaching Unit
NextZimbabwe – waving the resilience flag. A country that is about people, true connection, resilience and safari #OneZimbabweNext