Game Viewing in the Khwai Region

The meandering Khwai River forms the northwest boundary of Moremi and the area is characteristic of the Okavango Delta, teeming with a vast array of wildlife o be encountered on your Khwai game drive. Amongst the myriad of ecosystems within the Delta, the Khwai River is one of the most dramatic.
Game drives in Khwai deliver countless opportunities to view herds of zebra, lechwe, wildebeest, buffalo and elephant, as they are drawn to the river banks. With such bountiful numbers of prey, the predator population thrives, with lions, leopards, hyenas and wild dogs following in the footsteps of their next meal.

Owing to the abundance of water in the area, the birdlife to be observed on a game drive in Khwai is phenomenal. The diversity of habitats ensures impressive birding opportunities, with egrets, cranes, vultures and different species of eagles counting among the more than 500 species that can be encountered on your Khwai game drive.

Our passionate guides have in-depth knowledge of the local fauna and flora and will make the wildlife encounters on your game drives in Khwai the most memorable of experiences.

The wilderness area around the Khwai River makes this Botswana destination a true African safari gem and just the place to experience the ultimate night drive in Khwai. Being in a private concession, our Khwai River safari lodge is perfectly situated to embark on a night safari.

While a traditional day safari will bring sightings of commonly seen species like elephant, buffalo, zebra and giraffe, the cover of darkness presents the opportunity to encounter rarely seen animals on a night drive in Khwai. These include aardvark and pangolin as well as a variety of nocturnal birds and elusive predators like leopards. You can also spot other species like honey badgers, porcupines, small and large spotted genets and springhares.

Night drives in Khwai normally last around two-hours. Be totally immersed in the natural surroundings when stopping somewhere in the bush, switching off the engine and listening to the sounds of the night whilst admiring the stars of the African sky.

Guided walks in Khwai are sensory experiences, spending time observing, listening and learning more about this part of the Botswana animal kingdom. This wildlife-rich haven on the fringes of the majestic Okavango Delta is one of the best places in Southern Africa to reconnect with the natural world while on foot.

Get up close and personal with the remarkable landscape on a guided walk in Khwai as our expert guides share the intricate details of the local ecosystem and its inhabitants. Embrace the spirit of adventure as you trek through the rugged landscape, spotting animal tracks, curious insects, rare plantlife and countless other amazing sights.

The area is dominated by grasslands, permanent flood plains and large areas of mopane forests. There are no fences and the unrestricted movement of large herds of animals like elephants, zebras, giraffes and other plains game makes for spectacular sightings on your guided walk in Khwai. An intimate encounter or two with predators like wild dogs, lions en hyenas can possibly also be expected. Spotting colourful birds, including malachite kingfishers and little bee-eaters, ensure a guided walk in Khwai of the highest quality.

Top Accommodation for Game Viewing in the Khwai Region 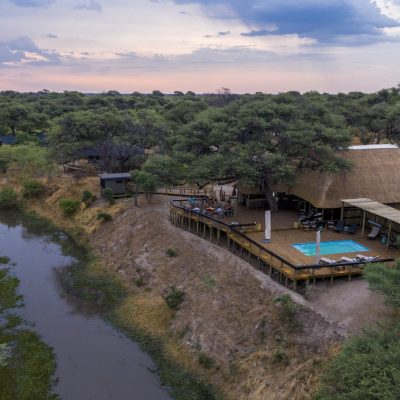