Using our Matobo safari lodge, located in a private game reserve bordering Matobo National Park as a base, game viewing in the Matobo Hills will bring plenty of sightings of a variety of fauna and flora species. These include over 200 different trees, 175 different bird species and 88 different species of mammals.

Spotting white and black rhinos, sable, giraffe and zebra is guaranteed on a game drive in this Zimbabwe wildlife paradise. Also present in Matobo Hills, is the highest concentration of black eagles, and breeding pairs of the species, worldwide. Those lucky enough may even catch a glimpse of the elusive leopard as the day makes way for night on a game drive in the Matobo Hills. The game drive also allows guests to take in the fascinating granite kopje formations so characteristic of the Matopos, filled with ancient rock paintings and cultural significance.

Experiencing a game drive in Matobo National Park, one of Zimbabwe’s smaller reserves, located close to Bulawayo, brings one up close and personal with the impressive scenery of the
famed Matopos. Meaning “bald head” in the local Ndebele language, Matobo is full of delightful surprises with a wide variety of fauna and flora to be spotted on a game drive.

Wildlife to be observed on a game drive in Matobo includes the endangered black and white rhinos. There is also the chance of eyeing another member of the Big Five as the area holds the world’s densest population of leopards.

A rhino-tracking safari in Matobo National Park offers the best chance of seeing black and white rhinos as these endangered animals are fiercely protected by the local wildlife authorities. Explore this unique wilderness in Zimbabwe while being led by an experienced guide in the park’s more protected section.
Rhino tracking in Matobo is possible largely due to the reintroduction of the species from KwaZulu-Natal, South Africa in the 1960s and then again in the 1990s from the Zambezi Valley.

A day trekking and observing black and white rhinos on foot in Matobo National Park is a safari experience unlike any other. Follow the tell-tale signs of tracks and droppings as you walk through the bush, scouting for these iconic big, grey beasts. Learn more about the species’ physiology, behaviour and conservation status during your rhino tracking experience in Matobo. While tracking the rhino in the bush you will also learn about the various other fauna and flora that surround you. It’s an incredibly informative and interactive experience.

These encounters will leave you fascinated and in awe of the beauty and diversity of wild Zimbabwe. Setting eyes on a crash of rhino (the collective noun for a group of rhino) in Matobo National Park will be the highlight of your rhino-tracking safari.

Top Accommodation for Rhino Tracking and Game Viewing in Matobos 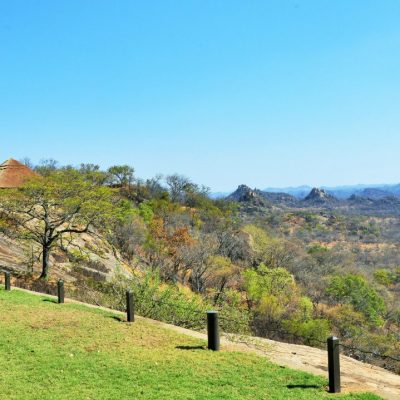